Welcome Adaptive Climbers in Your Gym

Six minutes, and eight seconds. A new personal best (22 minutes faster than her first attempt) is set by thirteen-year-old climber, Yashu Badalamenti. Yashu has cerebral palsy and started climbing last summer in an adaptive summer camp. She is delightful, encouraging, and a blast to be around.

Last summer was her first time at climbing camp. The Crag Climbing Gym extended the invite to climbers who attend the monthly adaptive meetups to come to try something new. Although coaches were a little nervous that they would not know how to adapt to kids of varying abilities, once camp began the kids were all eager to get on the walls and climb.

Coaches quickly figured out that a 1:2 coach-to-climber ratio was what would work best for the four climbers that joined. Coaches learned to adapt traditional climbing movements and techniques for this group, as well as how they communicated.

Yashu returned this year for the first-ever adaptive recreational league, a ten-week series of learning climbing safety, technique, and fun!

A different aspect of climbing is covered each week, and it has been incredible to watch the strength and confidence grow in these young climbers.

Nancy, Yashu’s mother said, “I have seen her build more strength, confidence, and coordination through climbing than I have in years of therapy… I think for her it is a great physical equalizer. With other activities, they are either straight up therapy for her, or activities with other kids she can’t really relate to. But when she is climbing she is no different than anyone else on the wall regardless of age or ability.”

Yashu looks forward to learning to belay this summer when she turns fourteen. 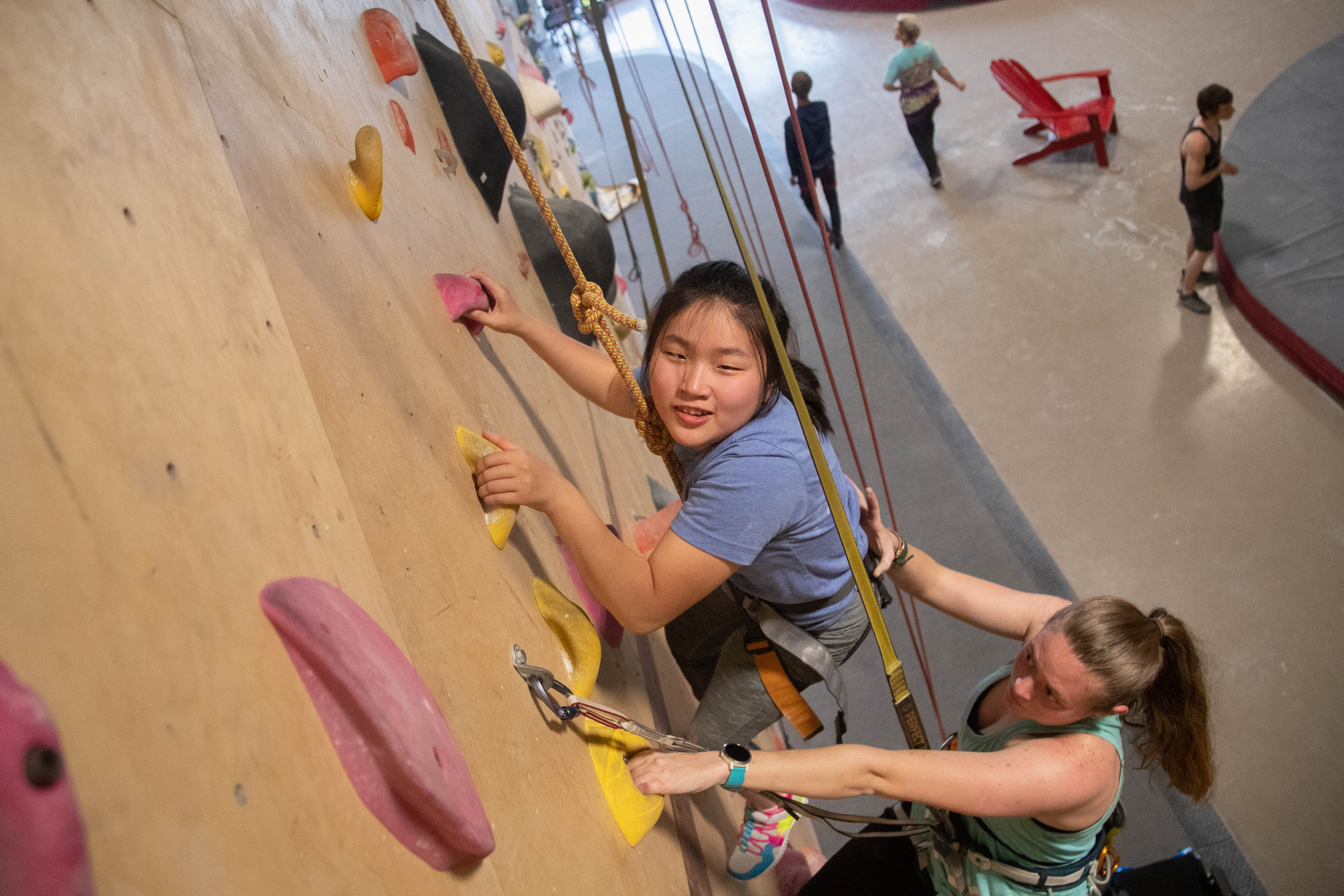 The monthly adaptive meetups began with Catalyst Adaptive Sports in 2014. Catalyst is an organization that acts as an agent of change in the lives of people with disabilities. It is volunteer-run, and all about discovering our abilities, our need for each other, and the importance of living active and healthy lives.

The first Catalyst Adaptive Climbing Clinic was in Nashville, TN. The goal of the clinic was to teach gym leaders how to be accessible for climbers with disabilities and to those in the community who want to become climbers. I met Amy Saffell at the clinic, a first-time climber with spina bifida. She has been climbing ever since and is now the Catalyst Sports Regional Coordinator.

“Just because they aren’t in your gym doesn’t mean they aren't out there. Everyone deserves the chance to be adventuresome. We just need the support. Gyms don't even need programs; climbers just need willing belayers.”

This brings me to Drew. He is a mellow and creative fourteen-year-old climber with an undiagnosed neuromuscular disease. His older and younger brothers had been climbing on the youth team pre-pandemic, and when programming started again, he wanted to give it a go.

Drew jumped onto the middle school team without hesitation. He hops off his Segway, warms up with the team, climbs the drills, belays, and has improved his strength, confidence, body positioning, and route reading over the past two years.

It’s been incredible to watch him adapt and succeed. When I asked Drew if he wanted to attend the adaptive camp last summer, he casually replied, “Naw, I’m good.” And he is. Drew embodies what I hope to develop in the climbing community: nonchalant integration. 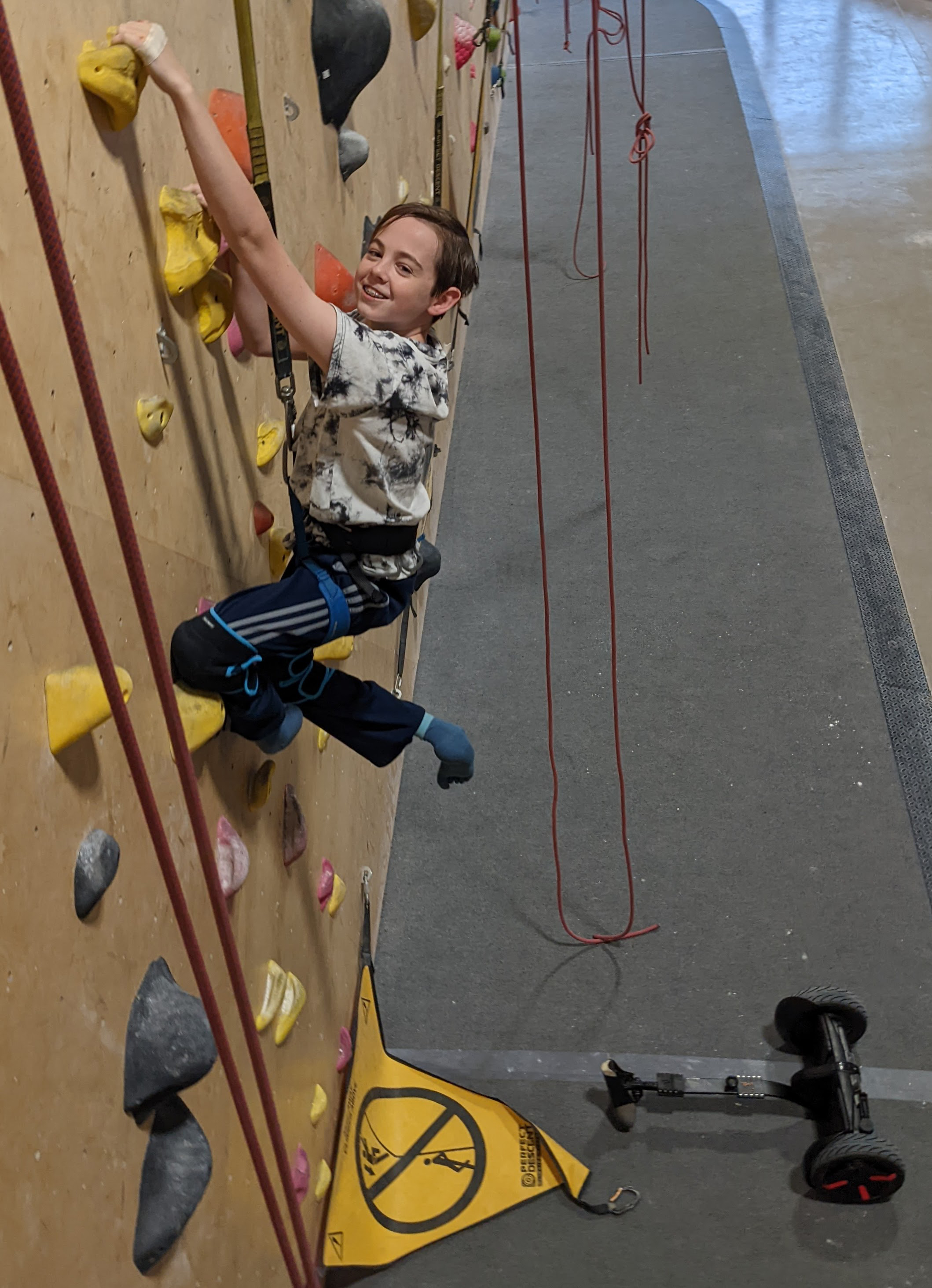 Drew climbing at The Crag Nashville

Lastly, I want to highlight Ben Hickson. Ben is a kind, athletic, and funny twenty-eight-year-old. He was a climber for five years pre- spinal cord injury and has been an adaptive climber for three years.

Ben saw a post on Facebook about the Catalyst Paraclimbing team needing climbers and wanted to join! He called Mary Ferguson, the Director of Adaptive Climbing with Catalyst, and was quickly on his way to Paraclimbing Nationals.

I asked Ben what gyms can do to support other para climbers.

”The biggest thing is just having a route we can climb. Jug hauls on overhangs are perfect. The biggest challenge for training is having the belay loose. It’s a game-changer. The overhang is nice, you don’t have to worry about your legs dragging up the wall.”

After four months of training two days a week, he was looking up, center stage, at ParaNationals in Huntsville, AL. Ben won fourth place in the AL1 division and earned his invitation to Finals in Salt Lake City!

I highlight these climbers because I wanted to shine a light on them as incredible people in our climbing community who want to climb hard and get strong.

There are organizations to help gyms develop venues for climbers who want an “adaptive only” crowd, there are climbers who are happy to jump into typical programming, and climbers who just want to learn to belay and are all set to come climbing with their buddies.

As leaders in the climbing community and influencers of gym culture, we can make our gyms accessible, invite our members to be volunteers, and offer classes and programs to adaptive athletes. There is a community of adaptive athletes who deserve the chance to be adventurous. Let's invite them to discover their abilities and come climb with us! 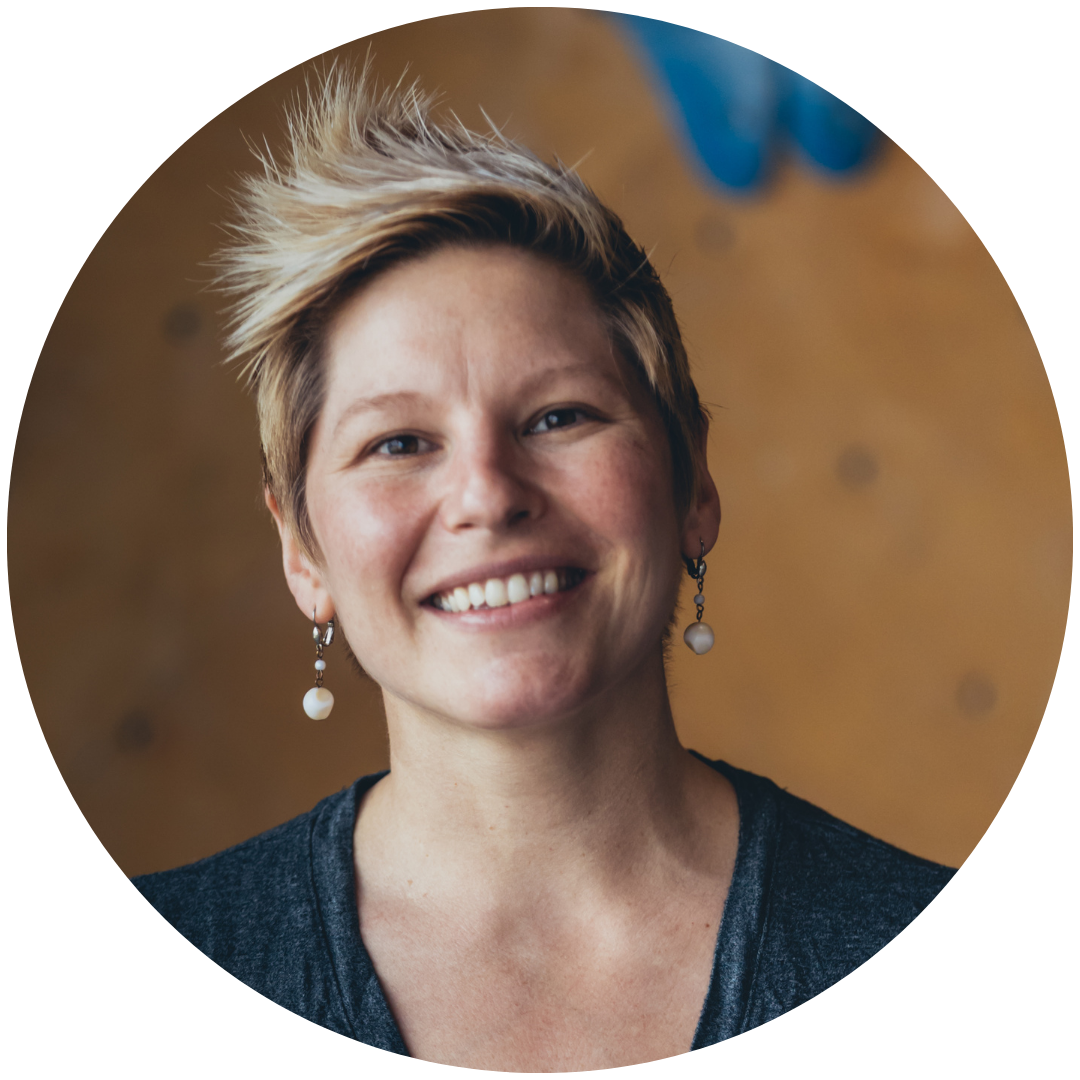 Hailey Caissie is the Programs Manager at The Crag climbing gym in Nashville, Tennessee. Hailey has been a climbing instructor since 2006 and loves seeing new climbers discover their abilities. She finds it especially fulfilling to coach young athletes toward discovering their potential. She works to inspire generations of climbers to become more intentional, influential, and inclusive.

The Intangible Benefits of Working in a Climbing GymJune 6, 2022 Teach Your Staff About Duties of CareMay 12, 2022